The DfE has stated that the five British Values are:

At Hawkinge Primary School we have reflected upon what these values mean to us. The examples that follow show some of the many ways we seek to embed British Values into our school curriculum.

Democracy – Having a clear voice to put forward our views, which are listened to.
Democracy is consistently being modelled by staff at Hawkinge Primary School, inviting views and sharing opinions through discussion. The children have genuine opportunities for their voices to be heard when important decisions about the school community are being made: for example, during circle time, debates in class and Pupil Voice sessions.  There is also an ‘open door’ policy where children can approach the Head Teacher and Deputy Head Teacher easily. The principle of democracy is also explored in the History, RE and PSHE, as well as in assemblies. 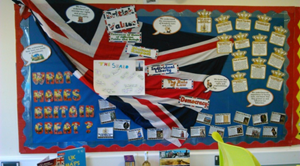 Rule of Law – Having a clear understanding of the school and society’s rules, along with the consequences when broken.
We have only two whole school rules at Hawkinge Primary School, ‘Be safe’ and ‘Learn well’. Individual class rules are decided by the children at the beginning of each year. In PSHE, children are taught the value and reasons behind the need for rules, which ensure a happy and safe learning environment. They also learn about elections, the Government, how parliament works, the reasons behind different laws and the consequences when these are broken. Regular visits from authorities such as the Police and Fire Service reinforce this message.

Positive behaviour is rewarded with weekly ‘Golden Time’ sessions and Politeness and Citizenship awards are given in our celebration assemblies.

Individual liberty – Being encouraged to speak your mind without causing offence.
We actively encourage our children to become independent individuals, giving them freedom, where possible, to make their own choices. For example, they can choose a task in Theme lessons (hopscotches), they can often select their own resources during Art, DT and Science and they can plan individually or collaboratively how to carry out an activity. Our curriculum provokes class debates, where children are invited to share their thoughts and where differences of opinion are accepted respectfully.

Our numerous extra-curricular clubs give children the opportunity to pick an activity that is of personal interest to them. 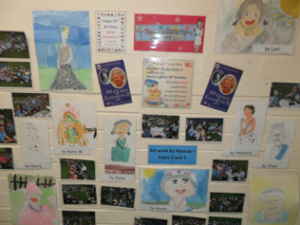 Mutual respect – Treating others how you would like to be treated yourself.
Respect is an integral part of Hawkinge Primary School’s ethos. Members of staff act as role models and it is expected that every member of our school community will be treated equally. Children learn that their behaviour has an effect on others and that there are consequences for both good and bad actions. The children participate in team building, E safety and anti-bullying activities. In PSHE the children learn about friendship and anti-social behaviour. Mutual respect is a recurrent theme during assemblies. 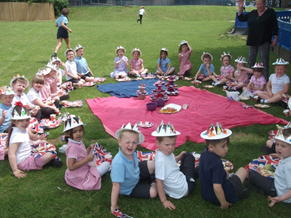 Tolerance of those of different faiths and beliefs– Understanding that everyone has the right to believe what they want to and not criticising them for it.
At Hawkinge Primary School we celebrate our cultural and religious diversity and members of different faiths or religions are encouraged to share their experiences. In RE, we realise the importance of knowing about the world’s major religions; finding out about celebrations and comparing the different belief and practices. We have a member of the local church that regularly takes assembly and holds a prayer club. In launch pads, musical, dance and theatrical groups often visit. In the English, History, Theme and Geography curriculums children hear stories from other cultures and research different countries, past and present.

This website uses cookies to improve your experience while you navigate through the website. Out of these, the cookies that are categorized as necessary are stored on your browser as they are essential for the working of basic functionalities of the website. We also use third-party cookies that help us analyze and understand how you use this website. These cookies will be stored in your browser only with your consent. You also have the option to opt-out of these cookies. But opting out of some of these cookies may affect your browsing experience.
Necessary Always Enabled
Necessary cookies are absolutely essential for the website to function properly. This category only includes cookies that ensures basic functionalities and security features of the website. These cookies do not store any personal information.
Non-necessary
Any cookies that may not be particularly necessary for the website to function and is used specifically to collect user personal data via analytics, ads, other embedded contents are termed as non-necessary cookies. It is mandatory to procure user consent prior to running these cookies on your website.
SAVE & ACCEPT